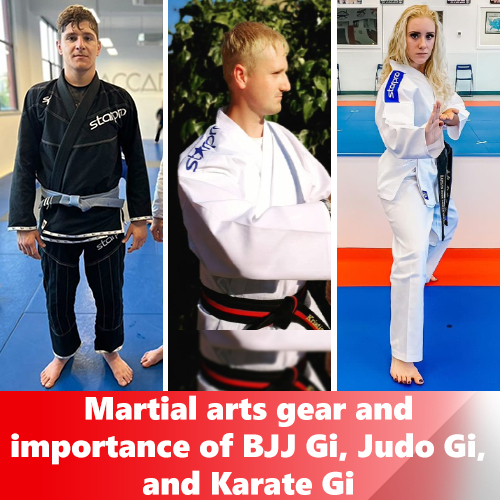 Have you ever wondered why, despite their many differences, martial arts seem to have the same uniform? A gi, or the top, pants, and belt which make up a traditional uniform, are quite similar across BJJ, Judo and Karate Gi.

For this, it’s important to keep in mind the spirituality and symbolism that’s at the base of all martial arts. To understand the gi, let’s start with the history of these martial arts:

Fighters known as Samurai in Japan created the first iteration of jiu-jitsu to be used in combat. These warriors, who fought in armed conflicts while mounted on horseback, came up with Jiu-Jitsu as a final resort in case they were faced with enemy soldiers when unarmed and on foot.

The samurai’s bulky traditional armor limited their range of motion, which made techniques such as locks, chokes and throws more effective than striking methods.

Japanese Jiu-Jitsu evolved with time into a variety of distinct styles. The purpose of the martial art also progressively changed from a military battle style to a more accessible form of self-defense.

Jigoro Kano, a pupil of conventional Jiu-Jitsu, established the Kadoka, a school of martial arts, in 1882. Kano taught pupils at the Kadoka the Japanese Jiu-Jitsu moves he believed to be the most powerful.

What set  Kano’s discipline, which would ultimately become known as Judo Gi, apart from other martial arts was its focus on hand-to-hand combat and matches between pupils to earn practical skills.

The origins of BJJ

Jiu jitsu, which roughly translates as “gentle art,” comes from the Japanese words “Jū” for “gentle” and “Jutsu” for “art.”

BJJ Gi or Brazilian Jiu Jitsu, has its focus on ground level combat, and it centres on the fighter employing time and leverage to force an opponent to submit.

Jiu jitsu concentrates on manipulating the opponent’s joints as well as the use of chokes. This differs from other classical martial arts in that they tend to emphasise punches and kicks.

Brothers Carlos and Helio Gracie and Luiz França were three of Maeda’s earliest disciples who later went on to develop Brazilian Jiu Jitsu as we know it today.

Seen now as pioneers of the field, every one of them  made a significant contribution to the evolution of Brazilian Jiu Jitsu as it is known today.

Over time, the practise of BJJ developed further, ultimately adding elements of wrestling as well as other grappling techniques into its instruction.

A history of karate

The Japanese phrase for “empty hands” roughly translates to Karate. Karate developed over many years in East Asia before being made into a martial arts system in Okinawa during the 1600s.

It was most likely created by those who were not allowed to carry weapons. In the 1920s, it was brought into Japan. With the development of several institutions and systems, each favoured slightly various training methodologies.

When commercial ties between China and the Ryukyu Islands were formed, an art called Kenpo was brought through the Chinese settlers coming to Okinawa. This combined with the Ryukyu Islanders’ own art known as  ‘te,’ or  ‘hand’.

Three distinct styles developed from three closely spaced cities in Okinawa, namely Naha, Shuri and Tomari. The variation is styles came from each city’s respective sociocultural requirements. These came to be known as Naha-te, Tomari-te and Shuri-te.

Because of their origin and the Chinese influence that helped shaped them, they came to be known collectively as Okinawa-te or tode, which meant ‘Chinese hand’.

In contemporary Karate, there are four styles originating from Kapan which have taken over. These are known as Shitō-ryū, Gōju-ryū, Wadō-ryū and Shotokan.

Back when Kano developed what is now Judo in the late 19th century, he designed a uniform for it that he based on everyday apparel.

Three pieces made up the uniform or ‘Gi’: a belt, canvas pants, and a woven jacket, all made of sturdy cotton. When the Gracie family pioneered BJJ, they took on this attire in keeping with Judo traditions.

The karate gi is very similar in nature, with the distinctive belt to differentiate it. However, historical references point to the Karate gi also being pure whie, belt and all.

There are two separate schools of thought on how the colored belts came to pass. A commonly accepted theory places the genesis of the graded color system of Shotokan karate in post-World War II Japan.

This was during the depression era when resources were tight, so the process of hand-dying belts was only possible from white, through to blue, red, orange, yellow, green, purple, brown and finally black. Another view states that a historical tradition in Japanese dojos was hanging up the used gi after each training.

The sun and elements helped it develop a patina so that it had a brown hue. As the gi and the belt got dirtier. It signified a more proficient practitioner.

Whether a BJJ gi, Karate Gi, or Judo Gi, the basic structure and style are all the same.

The fact that a gi resembles a kimono is no coincidence: this ensemble was the standard clothing of men in Japan at the time that these martial arts were developed. Hence, the uniform followed suit. It’s important to remember that these arts were not created for a controlled situation but rather for protection from threats in everyday life. That’s why the gi helped train fighters in regular clothes to help them get used to the restricted range of motion and the weight that such outfits tend to have, making them better fighters overall through conditioning.

What does a gi represent?

As one can tell from the rich history that various martial arts have, there’s just as much importance placed in representation and symbolism as there is in actual fighting. The importance of the gi isn’t just as martial arts gear; it’s also a symbol of the mindset martial arts propagates. So what does a white gi mean?: